My childhood home, a rambling rectory, not only housed my family but a marvellous menagerie of creatures. Among our more exotic pets were a pair of chameleons and some tree frogs. The chameleons darted out their long tongues when offered tasty morsels and camouflaged themselves by changing colour to blend in with their surroundings. They and the frogs were eventually given to Dublin zoo, but my mother’s acquisition of unusual fauna continued.

An outside aviary was home to a large variety of exotic finches and ‘Beatle Canaries’, and a glamorously feathered Golden Pheasant lived in the walled garden. We had an impressive collection of pedigree dogs, and frequently puppies, plus the cat Tibbs who had been born in Trinity College, Dublin, and rehomed by one of my brothers.

There were hens, bantams, a tortoise, goldfish and mice and guinea pigs and my mother grew extremely excited when the occasional bat flew into my bedroom because she had a particular fondness for these nocturnal adventurers.

I adored dear Tibbs the cat, who I regarded as my pet, and also began to long for a goat…

Exciting rumours that a goat might be available reached me via Alice who worked for us, and who was also one of my best buddies. After some persuading my parents relented and the goat arrived…a tiny ‘kid’ who was very hungry. He was my responsibility and I called him Bambi. Every morning I got up early and walked down to the creamery to collect fresh milk for him. I was eight or nine and it made me feel important, grown up.

I had a goat and was part of the mysterious and impressive morning routines connected with the creamery. Farmers passed me with their milk churns, some travelling by horse and cart and some by tractor. I held my bucket carefully and watched as it was filled with the creamy liquid. I had to return home quickly because Bambi would be eagerly awaiting his breakfast. He bleated joyfully whenever he saw me. He followed me and gazed up at me adoringly. It had some of the passion of a Mills and Boon romance. 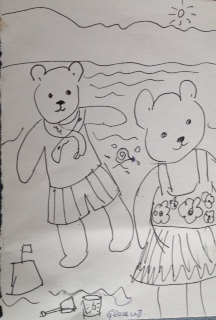 (Not that relevant to blog but like teddy bears!)

The thing is little goats get bigger. They move on from milk to grass, and anything else that takes their fancy. After a while they grow horns and become rather opinionated and it is sometimes not easy to keep them attached to their tether when they are on a lawn.

It was suggested to me that Bambi might be better off with a woman who kept a herd of goats, he’d have more freedom. I wasn’t impressed by these suggestions but Bambi left anyway. I was no longer a girl with a goat.

A couple of years passed and I had transferred my adoration to a pony called Merrylegs. I was sure Bambi had forgotten me. He probably had loads of other things to think about.

One day Merrylegs and I went riding on a pretty road on a nearby hill. I looked into a huge field, wondering if we could go for a gallop across it, when, in the distance, I saw a small herd of animals. They were too small to be cows.

“Bambi” I found myself shouting, though it seemed silly. “Bambi!” He wouldn’t be there of course, I just felt I had to call.

And then one of the creatures left the herd, he was just a dot in the distance. He was scampering towards me, he was bleating, he was Bambi! I couldn’t believe it. We greeted each other joyously.

Bambi was okay…and he hadn’t forgotten me.

He was indeed a darling goat! 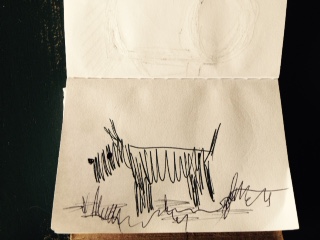 If you are in the mood for being read to click here.