An Old Recipe And A Most Unusual Biscuit

The first biscuits I ever baked were called ‘Melting Moments’. I was about eight years old when I found the recipe in a cookery notebook my mother kept in a kitchen drawer. It was dog-eared and worn and I decided to browse through its much used pages. Sponge cakes…casseroles…the ingredients for many tempting delights were carefully recorded on its pages. And then I came across the words ‘Melting Moments’ and they seemed to tug at my heart.

They were not written in my mother’s hand and I did not recognise the upright rounded writing. The ingredients were simple but the image they evoked was exotic. What made a moment melt, I wondered. I decided I wanted to find out for myself.

I was already well acquainted with baking. I often assisted my mother with important tasks such as
scooping up the creamy leftovers of cake mixture from the bowl before it was washed. I had even learned how to make pancakes on our large and carefully tended Aga cooker. The kitchen was one of my favourite rooms in our rambling old rectory. A large radio sat on the fridge and I liked to imagine singers and actors and entire orchestras lived in its spacious interior.

I especially enjoyed the smell of baking, its warmth and its comfort. The way it rose into the air and wafted around the downstairs rooms causing smiles of anticipation and a deepening sense of heart and home. I wondered if the Melting Moments would have a different and even more sensuous scent. My mother had not cooked them, not in recent years anyway. They were an adventure I would take on my own. 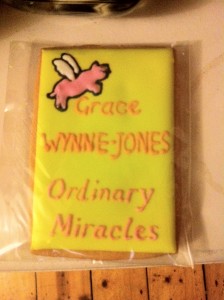 The ingredients were simple enough and I measured them carefully. They turned into a satisfying dough in the bowl and the dough tasted good – I naturally had to taste it. I then rolled the dough into small balls and placed them on a large baking tray, which I had already greased and powdered with a skim of flour. I stared at them curiously as I placed them into the Aga.

The recipe instructions were very short. I was uncertain, for example, of how long the biscuits should remain in the oven. After a short while a tantalising aroma began to fill the room. I tugged open the oven door and saw that they had flattened and dramatically widened and were almost sizzling. Had I got the recipe right? What were the Melting Moments turning into?

Long minutes passed and I checked on the Melting Moments frequently. Eventually they were golden brown and I removed them from the Aga and stared at them with fascination. They did not look like ordinary biscuits. They looked strange and plump and were soft when I touched them. I poked at them again – they were hardening quickly. Soon they were firm enough for me to lift them. I placed them on a wire tray where they could cool. I eagerly lifted one to my mouth.

Crunch, it was chewy, and delicious.

It was like no biscuit I had ever tasted.

I smiled with relief, and satisfaction.

Soon family members began to drift into the kitchen and announced that my Melting Moments were highly satisfactory. I sensed their surprise and delight. My mother’s smile and the praise contained the hope that there would be more Melting Moments. They became part of my small, but eager, culinary repertoire.

I do not know what happened to that small fawn covered recipe book. Though I have many other family mementos it is not amongst them. Before my mother died I asked her to explain some culinary secrets. How, for example, did she make mince so delicious? What caused the piquant and intensely savoury taste in her chicken casseroles? But they never tasted as good as when she made them herself.

As for the Melting Moments, I discovered they were cookies and not biscuits. They had drifted into my mother’s recipe book from America – the New World – a place that was my home for a while many years later.

I wish I had that old recipe because Google supplies many listings for Melting Moments but the ingredients seem altered somehow, not quite as I vaguely remember them.

It seems I will have to experiment again, have another cookie adventure and create my Melting Moments from online advice and the memory of how they were when I first baked them. How their sweet aroma rose and drew the people I cherished into the kitchen to taste them.

It was a very sweet moment indeed.

(Shared with the kind permission of Sunday Miscellany, RTE Radio.)

The featured image is by Hans Braxmeier from Pixabay.