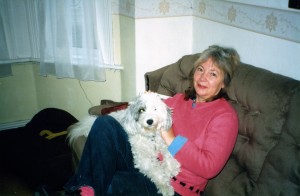 Wow it’s taken me quite a while to upload this photo. For some reason a copy I made of it in ‘my documents’ didn’t upload and the Internet connection was dodgy…along with strange sea-like noises on my phone. When I clicked on ‘publish’ it simply gave the caption…where had the photo gone to? Phoned dear pal Philip using my ‘I sat down to upload photo and feel like I am flying an airplane voice’. He was more than happy to help but had a visitor and so he offered to upload it for me later. Was very grateful to him but I’ve uploaded photos before (admittedly with his guidance). Decided I would try to upload it myself. Again. I’d already tried this a number of times.

At this point I remembered that I am interested in Buddhism. In living in the moment etc. Also noticed a scribbled quote above my desk which says ‘My silent observer transcends my individual identity. Deepak Chopra’. Realised my identity, in that moment, was far too attached to idea of myself as woman who uploads photo quickly and then watches people buying antiques on telly (I like ‘Put Your Money Where Your Mouth Is’…it starts at 5.15 p.m.). Thankfully ‘silent observer’ gave me some perspective on mild computer funk. Became more aware of breathing and other Buddhist type tips.

Here I should probably mention that I wanted to upload the photo of myself with canine pal because I want to gradually let go of my attachment to the current photo on my website. It was taken some years ago by a talented and hip photographer in Brighton and I suspect he may have done flattering things to it…along with careful use of lighting and deft choice of lens. Anyway…I decided to try to upload woman with dog image from the usb stick thingy instead of ‘my documents’ and…hey presto!…there it was.

The photo was taken in a friend’s house…her name is Jo and her very charismatic dog is called Izzy. Izzy loves being petted and cuddled. She lies rapturously on her back to have her tummy massaged.
I would like to get my own dog some day but in the meantime it’s great to occasionally borrow one! My novels include an assortment of colourful pets. There’s an adorable pig in ‘Ordinary Miracles’, a cat, a rather rude budgie, fish and terrapins in ‘Wise Follies’ and very nice dogs in ‘Ready Or Not?’ and ‘The Truth Club’ . Some of the novels also include horses. I love horses and ponies. And chocolate!