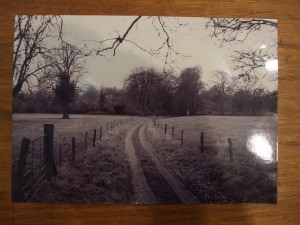 If you want to read an insightful and helpful article about ‘What An Agent Wants’ click here. It’s from the Novelicious.com website and my own agent has kindly mentioned me in it. Many thanks dear Lisa!

The photo that accompanies this blog is of my childhood home. Glad that I took the photo because dear Knockainey Rectory burned down some years after we left it…the big trees were felled and even the driveway has gone. I have written a number of blogs about it. One called The Rectory (August 27 2009) is very descriptive. (Knockainey is a lovely rural village in County Limerick.)

As to the ‘Soft Chairs’ bit of heading…five rather spartan years at boarding school have given me a huge appreciation for soft furnishings. If there are sofas in a cafe I am very grateful. And if I eat lunch in a place that has softly upholstered chairs my enjoyment of the food goes up some notches. Though I am on a budget I sometimes go into very expensive hotels, sit on one of their pillowy seats and order a cappuccino. For some reason very expensive hotels often have smallish cups but, with an extra pot of boiling water, that cappuccino can last a longish time (they are usually not cheap but often come with small Italian looking biscuits).

I sometimes like taking out my notebook in such places to, theoretically, do some writing. Of course there is a temptation to listen in on nearby conversations since the people often look like they have flown in from somewhere interesting…have just been on a spending spree…are discussing the intricacies of big deal business or a marriage. The seats are, naturally enough, not that close so one just hears the occasional snatches. Most of the women look like they use expensive skin lotions (the stuff that comes with tiny instructions in numerous languages and accompanying before and after products including serums). The men tend to do a good line in sheenily lined jackets.

Places like that could, of course, do with a good dog. The Morrison in Dublin, for example, has a fabulous collection of paintings and is very plush but a chocolaty coloured Labrador would really add some canine style. That’s the hotel the scary IMF stayed in when they came to Ireland to check on the country’s financial situation…somehow reminds me of maths homework and red ink pens. A Labrador might have softened them up a bit.

Did some gardening yesterday. My patio is smallish but it has lots of plants. My dear honeysuckle bush got a radical pruning the other day from an expert…it had got very large and woody and ‘pot bound’ in the raised bed. When the guy fetched a noisy sort of chain saw I was a bit alarmed but the thing had to be done. I had put if off for far too long already. Now it looks very shorn, but it has a pretty additional raised bed to stretch its roots into. (Railway sleepers are great.) Also repotted a number of other plants that needed more room…getting some of them out of their too small pots felt a bit like wrestling. They look really nice in their new ‘homes’.

‘She has an assured style and a wonderful insight into the separated lady’s lot…I couldn’t put it down. I literally read it from cover to cover.’
Muriel Bolger, ‘No Jacket Required’ RTE RADIO ONE

‘Wynne-Jones’s sense of humour and the self-mockery of her heroine makes it both funny and touching.’ TIMES LITERARY SUPPLEMENT